MEASURE B
THE LARKSPUR STREET REPAIR AND ESSENTIAL SERVICES MEASURE 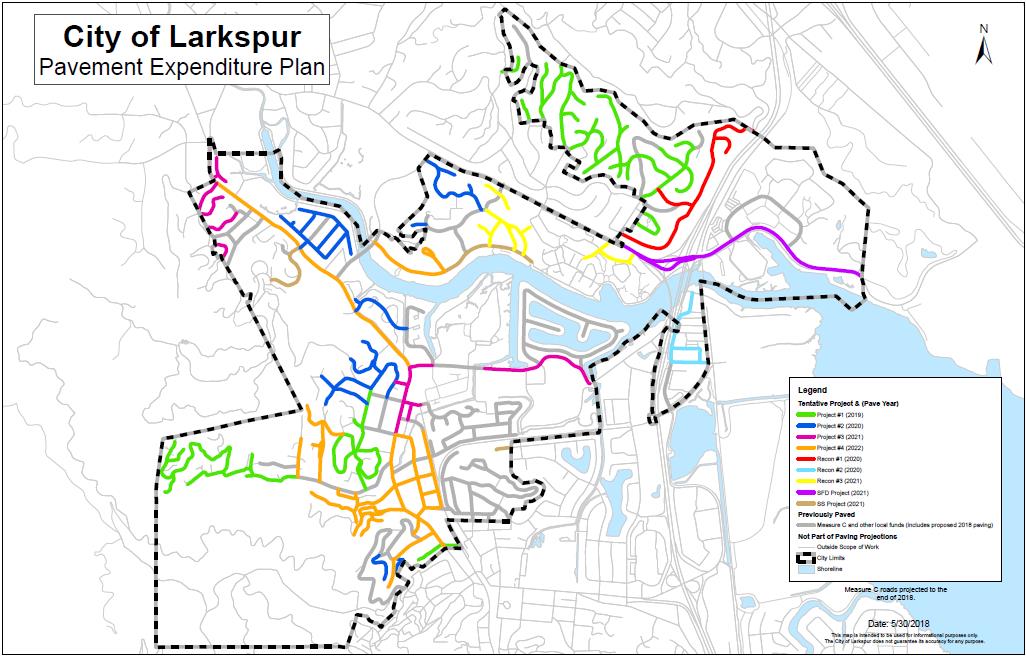 This year's project is being funded primarily with Measure B sales tax revenue, as well as vehicle impact fees, gas tax monies and utility coordination fees.

Click here to view the letter sent to residents living on roads in our Year 1 Schedule.

The Tentative Paving Schedule for the Streets is:

About the 5-Year Plan: Staff has worked with our paving consultant and utility providers to develop a plan that will allow the City to fix all of Larkspur’s roads over the next five years. Please note that the plan takes many factors into account in addition to the condition of the street.

By using this strategy, the City will fix some roads that are in better condition (but still in great need of repair) before some of the roads in the poorest condition.

Public Works staff developed a timeline for implementation of the road program using Measure B funds. City Council adopted the Plan in May of 2018.

Other infrastructure work required as part of the 5-Year Plan:

Patch Paving: The City has developed a plan to “patch pave” streets that will be paved in later years of the plan during the first year of the 5-year plan. This patch paving will bring these streets into better condition before they are fully repaired in later years. Additional information about this project will be released when details become available.

ADA and Wheelchair Access: A separate project to install mandated wheelchair ramps where required on all streets to be paved will take place in the first year. This will make our streets more accessible to all of our residents. Additional information about this project will be released when details become available.

In November of 2017, Larkspur voters approved the extension of the Larkspur Street Repair and Essential Services Measure, a sales tax that will allow the City to accelerate repairs to our streets, roads and potholes, with the goal of being able to address these infrastructure needs over the next five years.

At the December 20, 2017 meeting, the City Council accepted the results of the November 7 election.

Measure B, the Larkspur Street Repair and Essential Services Measure, passed with a final vote count as follows:

The City thanks everyone who participated in the public process and the election. The passage of Measure B will allow the City to accelerate repairs to our streets, roads and potholes, with the goal of being able to address these infrastructure needs over the next five years. Measure B renews and extends the sales tax at the 3/4-cent rate until ended by voters.  Under these terms, the City can fix our roads and address other needs prioritized by our community, including 9-1-1 emergency response times and ensuring that our storm drains function properly and keep our waterways free of contaminants.

Our City prides itself on its fiscally conservative budgetary practices and accountability.  Measure B maintains Independent Citizens’ Oversight to ensure that all voter-approved funds continue to be spent consistently, towards priorities identified by voters.

HOW HAS THE CITY USED ITS LOCAL SALES TAX MONEY?

Measure C was approved in November 2013. The sales tax began being charged in April 2014. As a result, the City did not have Measure C revenue to spend until the later part of Fiscal Year 2014-15. The approved expenditure plan for capital projects (including road repair) is the City’s Capital Improvement Plan. Information is on this page: http://www.cityoflarkspur.org/CIP. The budgeted amounts for the road repair program for the past several years:

Some points worth noting:

The other uses of Measure C have been:

FY14-15: $45,000 was set aside for the Fire Chief and the Public Works Director to use for vegetation management. Our program has focused primarily on working with private property owners to take responsibility for their vegetation, so costs have been modest. We have a bit less than $20,000 left in the account.

FY15-16: $45,000 was set aside for repairs to our fire station, but the repairs were postponed and the money has not yet been spent.

Should you have any questions or comments about the Measure B Five-Year Paving Plan you may contact Public Works Director Julian Skinner at jskinner@cityoflarkspur.org.

Larkspur is committed to improving the safety and quality of our roadway system. In recent years, the City Council has taken steps to increase revenues and direct monies to our roads.

How are funds used

Roadway and infrastructure maintenance funds from the funding sources shown below are used to maintain pavement, storm drains, street signs and pavement markings, and concrete in the public right of way.


The City has fees, called vehicle impact fees (VIF), in place that charge garbage and large construction trucks for their impact to our roads.

Partnering with Utility Agencies
The City coordinates with utilities such as RVSD, MMWD and PG&E, for their improvement projects that require road excavation. These agencies pay the City for in-lieu pavement restoration fees, which are then applied to future year's pavement project. Partnering with utilities allows us to get a road repaired for fewer Larkspur dollars, leaving more money to spend on other roads.


In November 2013, the citizens of Larkspur approved Measure C, an increase of a half-cent to our general sales tax revenue. The Measure C half-cent sales tax went into effect on April 15, 2014.

City Council adopted a policy to expend a minimum of 80% of Measure C funds toward pavement maintenance. Each year, a Citizen's Oversight Committee works with City staff to recommend a specific funding level for the coming year.

For Fiscal Years 2014-15 and 2015-16, the funding level is 95% of Measure C revenue.  (The other 5% is being used to establish a fund for the Fire Department to work with property owners who live on our hillside roads and have vegetation that is a fire threat and affects the ability for vehicles to pass.)

The strategy on road maintenance for use of Measure C funds is, "direct use of funds only to repair aging and deteriorating neighborhood streets and roads, repair potholes, clear hazardous and flammable brush to prevent fires and improve emergency vehicle access, and maintain police and fire protection."

FIXING OUR ROADS FAQ's
If you have not been able to find the answers to your questions, please click on the link for more information.
Larkspur Pavement Management Plan FAQ's

If you need additional information regarding Measure B, please contact the City at 415-496-2401, or email  communications@cityoflarkspur.org.

The following project-related construction documents are available for viewing. Please note that due to large file sizes, you may experience longer loading times.

The following list and map identify the street repairs recently completed. This list also serves as the City's moratorium street list. Per the Larkspur Municipal Code §15.32.070, no excavation or pavement cutting shall be permitted on newly paved roads for a period of five years.

Your Patience is Appreciated!

We want to repair every road in Larkspur, but that will take time and money.  In a given year, roads are selected by evaluating:
Thank you for your support and continued patience!

The survey, conducted February 17th– March 1st 2017 by the respected firm of FM3 Research, was commissioned to assess current resident perspectives on community priorities and service needs.  Respondents continue to give the City consistently positive overall job ratings, with a strong majority of more than 2 to 1 giving the Larkspur excellent or good performance rankings.

As much as 85% of respondents identified “repairing streets, roads and potholes,” as being the top priority, followed by maintaining police/fire protection and 911/emergency response services and repairing storm drains to prevent contaminated spills into the Bay.

“We greatly appreciate the time our residents took to give us this important feedback,” said Larkspur City Manager Dan Schwarz. “Our goal is to incorporate these perspectives into this year’s budget planning process so our financial strategies reflect the community’s priorities.”

Said Public Works Director Julian Skinner, “I am not surprised by this helpful input from our public.  When I am out in the community, people tell me they want the City to make pothole and road repairs faster—and I agree.  Doing so prevents further deterioration and lowers our future maintenance costs.  Unfortunately, many of Larkspur’s neighborhood streets are still riddled with cracks and potholes and we must address these hazardous conditions so our motorists, public transit, and public safety vehicles are not at risk.”

The City commissioned the survey to get input on resident satisfaction with city services, service priorities, and community perspectives on renewing voter-approved local Larkspur funding. The survey indicated the public would support renewal of Larkspur’s existing voter-approved funding program at percentages as high as the low 70 percentiles (for a simple majority requirement measure) to continue to address infrastructure needs and vital services.

The City regularly surveys its residents to measure satisfaction and to gauge community priorities as it relates to City-provided services. The last survey taken was in 2013.

“Police and fire services, pothole/road maintenance and disaster preparedness are essential to maintaining our safety and quality of life,” continued Schwarz. “It’s incredibly helpful to know that residents not only value these services, but want more of them.  We are working on a plan to make accelerating street infrastructure repair our top priority, and we look forward to keeping the community informed.”